What makes a bride and groom to be hire out an entire ice rink for their 70 plus guests, and treat them to a pre-wedding party like no other? Well, that’s exactly what Caroline Taylor and Gus Murchie, from Bedfordshire (pictured), have done, as they get set to tie the knot at a secret location tomorrow. We went along to Ayr Ice Rink, where the group – all first timers – were enjoying a little R&R before the big day.

Pictures of the day, courtesy of Liz Boswell, can be found in the Gallery tab in the headings or by clicking here

”My family moved from Ayrshire to England in the 1930s, so that’s really why we’ve decided upon this place. We’ve brought such an international group, from New York, Barcelona and Australia. We thought curling would be a great thing to try as the Winter Olympics were on telly while we were organinsing our wedding weekend. Since we were getting married in Scotland we thought it would be rude not to try out such a traditional, iconic Scottish sport. The rink have been so helpful, and we are just eager for our guests to have a fantastic day, doing something they wouldn’t normally get the opportunity to try’’

Scottish Curling Development Officer, and Olympic Medal Winner Scott Andrews received the initial email, asking if the event would be possible, a few months back: 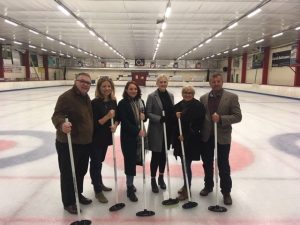 Some of the wedding guests, on the ice at Ayr Ice Rink

‘’Some of them have said it looks easier than it is, I’m sure they’ll really enjoy it. I’ve organised corporate groups before, but never a surprise wedding event – it’s certainly something a bit different, and something we are very happy to help with.  It could catch on…”